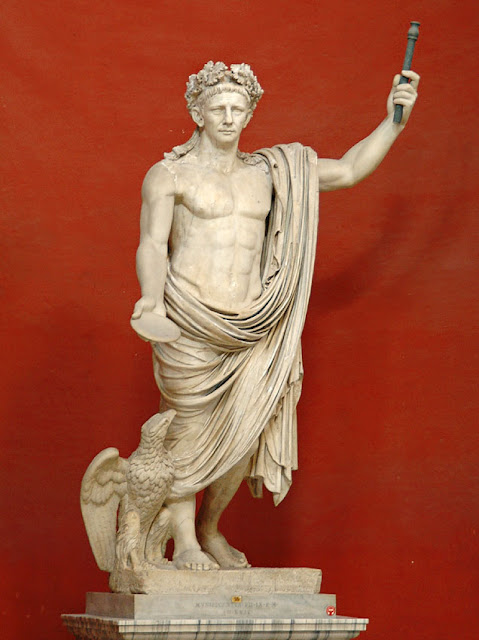 
The statue presents two incongruities.  First, it obviously joins the body of a young man with the head of a man in his 50s.  Second, it presents the emperor in the guise of the chief Roman god, Jupiter: the oak crown (the oak being the god's sacred tree), the scepter in his left hand, and the eagle at his feet leave no doubt about this (his right hand probably held a thunderbolt—the patera is a mistaken restoration).  How were these (to us) odd combinations received by the ancient viewer? 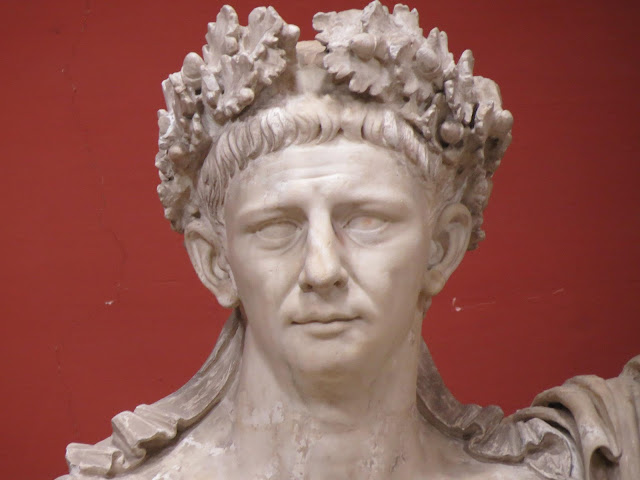 (1) The head shows the signs of aging common in middle-aged people: forehead lines, bags under the eyes, nasolabial folds.  Claudius was indeed about 50 at the time of his accession in AD 41.  So the head seems true to life.  By contrast, the body is youthful.  His nude torso puts that youthfulness on display.

Realism was the mark of Roman portraiture already under the Republic.  Roman elites kept ancestor masks (imagines) in their homes.  Some Roman portraits are actually hyper-realistic, with exaggerated features (including exaggerated defects): modern scholars call these “veristic” and the style “verism.”  Why exaggerate?  Verism projected aristocratic virtues: maturity, experience, seriousness, determination…  The logic is not unlike that of caricature: physiognomy reveals character, and character belongs to ideology.

The combination of an old head with a young body was also already common under the Republic.  This statue (right) found at Tivoli (known as the Tivoli General—note the military breastplate at his side) joins a realistic head with a semi-nude body that is youthful and muscular.  It is worth noting that this incongruity is a Roman phenomenon: it is not found in Greek portraiture.

So the portait of Claudius was nothing new...  Yet in a way it was.  For Augustus had set a pattern for portraiture that was distinctly classicizing.  His statues and those of his successors Tiberius and Caligula are in the style of the Greek art of the fifth and fourth centuries, i.e., that of Classicism, especially the High Classical moment of Pheidias and Polyclitus.  The early Julio-Claudians are portrayed as ever youthful, more ideal than real (or veristic).  They do not age.  And, generally speaking, all their portraits follow this classicizing pattern.  After all, they were a big ruling family, a dynasty.  They had a claim to rule, and their portraiture showed that they all shared that claim.

So in reverting to the realism of Republican portraiture Claudius was making a statement.  He was staging a return to Republican values.

(2) Claudius’ assimilation to Jupiter was similarly ideological.  "Do not challenge my rule," he seemed to be saying, "unless you want to challenge the very order of the divine world!"  The association of the rule of the Julio-Claudians with that of Jupiter was traditional, a commonplace already in Augustan poetry.  Iuppiter in caelis, Caesar regit omnia terris: “Jupiter rules all in the heavens, Caesar rules all on earth” so runs a line attibuted to Vergil in the Latin Anthology.  Horace compared Augustus to Jupiter (Odes 1.12, 3.5), and so did Ovid. 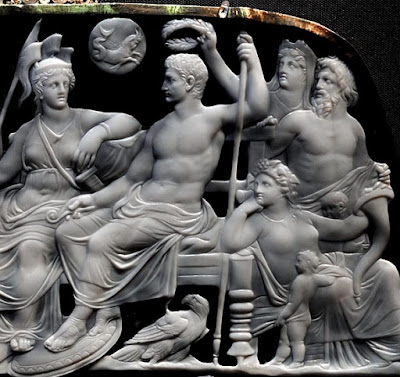 Augustus is portrayed as Jupiter on the Gemma Augustea (left), where he holds a scepter, with Jupiter’s eagle at his feet. 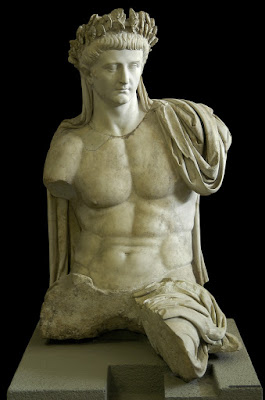 If the portrait of Tiberius in the guise of Jupiter (right) from the theater at Caere (modern Cerveteri) was indeed recut from a portrait of Caligula, then this piece, too, was a model for portrait of Claudius.

So the answer to the question concerning the Roman reception of Claudius’ incongruous portrait is this: the realism of the head and the link to Jupiter were traditional, part of the conventional language of images.  But as such they made a strong statement.  Claudius was a Julio-Claudian, a legitimate ruler, and he was announcing a return to the values of the Republic.  This program must be understood in its context.  Claudius followed Caligula, who had been assassinated after only four years in power.  He had been found hiding behind a curtain by the Praetorians and made emperor.  He needed to show that he was not going to be another Caligula.  Afflicted with a stutter and a limp, and known more as a bookworm than as a statesman, he needs some powerful PR.  So he chose to present himself as both an old-fashioned Republican general (like the Tivoli General) and a Jupiter-like guarantor of order and stability.  His invasion of Britain in AD 43 was a renewal of the project of Julius Caesar in 55 and 54 BC.  His big message was that he was turning back the sundial, back to the good old days.

Posted by gjclarthistory at Wednesday, March 30, 2016